Last week, while creating the Wordfence monthly attack report, we noticed that Algeria had moved from position 60 in our “Top Attacking Countries” list to position 24. That was a big jump and we were curious why Algeria had climbed the attack rankings so rapidly.

What we discovered on closer examination is that over 10,000 IP addresses in Algeria were attacking WordPress websites in March. Most IPs were only launching between 50 and 1000 attacks during the entire month.

The following chart is a histogram. It groups IP addresses by the number of times they attacked. As you can see by the spike on the left, the most common number of attacks was around 100 to 200 for an IP address. Few of the attacking IPs generated more than 2,000 attacks during the entire month of March, 2017. 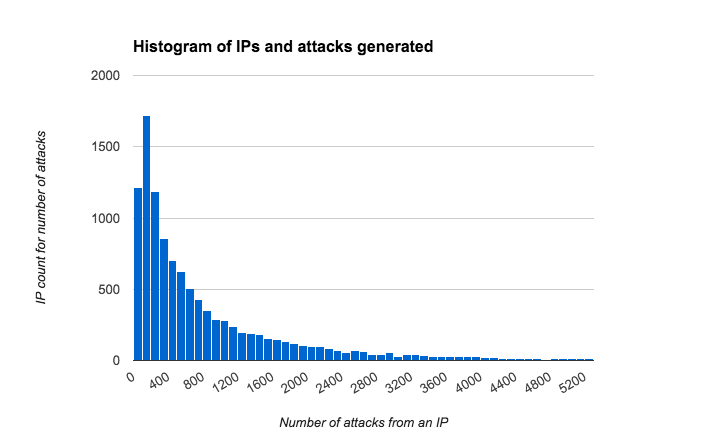 We wanted to learn more about these attacking IPs, so we dug a little deeper.

We extracted the list of Algerian attack IPs and we included the time of first attack logged and the time of last attack logged. The majority of the IPs spent just a few hours attacking and then stopped for the rest of the month. The histogram below shows how many IPs spent less than a day (shown as 0) attacking compared to those that spent 1 or more days. As you can see over 7,000 IPs spent just a few hours attacking during March before they stopped. 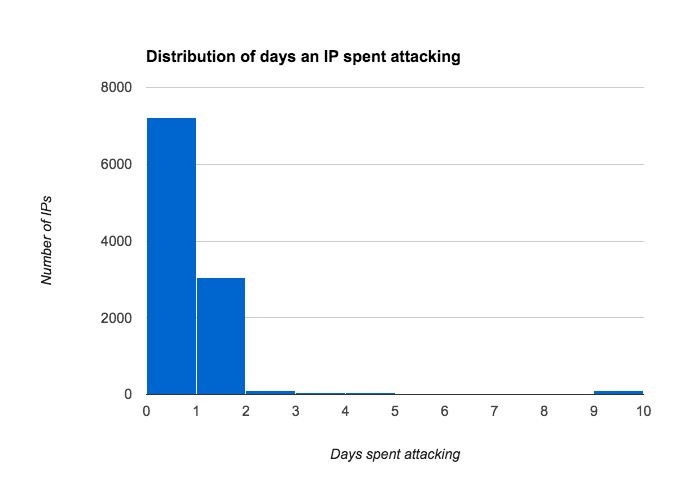 These IPs switch on, perform a few attacks and then switch off and aren’t heard from again for a month. What we have found is a botnet that is distributed across thousands of IPs. Each IP is only performing a few attacks, those attacks are spread across many websites and the attacks only last a few minutes or hours.

These evasive techniques indicate a higher level of sophistication than we see from, for example, “PP Sks-Lugan” which we’ve written about in the past where we see a single IP generating millions of attacks.

When we looked at who owns each of the attacking IPs in Algeria, we found, over 97% of them are owned by Telecom Algeria. There are approximately 30 different ISPs in Algeria. We do see some attacks from other networks, but nothing compared to the volume that originates from Telecom Algeria.

The attacks we saw in March originated from the following networks: 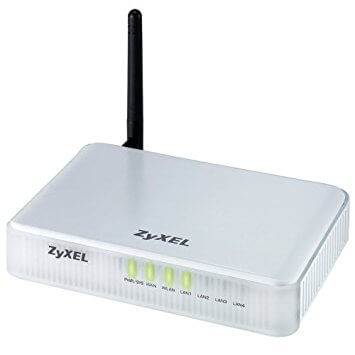 We performed a network survey on a sample of 8,962 IPs on Telecom Algeria’s network. We received responses from 3,855 IP addresses.

Allegro RomPager 4.07 is an embedded web server that has a severe vulnerability, dubbed the Misfortune Cookie by Checkpoint, who discovered it in 2014. The identifier is CVE-2014-9222.

It appears that attackers have exploited home routers on Algeria’s state owned telecommunications network and are using the exploited routers to attack WordPress websites globally.

Other ISPs With Vulnerable Routers

Algeria drew our attention because its country ranking jumped from 60 to 24 in our top attacking countries for March. Once we took a closer look at the attacking IPs, we were able to identify a specific pattern of behavior for these attack IPs:

By searching for similar patterns, we found that there are several other ISPs that seem to have the same problem that Telecom Algeria has.

BSNL is a state owned telecommunications provider in India. During March we saw attacks from 11,495 IPs on their network.

In a survey of BSNLs network, we found that:

PLDT is the largest telecommunications provider and digital services company in the Philippines.

In a survey of PLDT’s network we found that:

Once we could identify the attack pattern of compromised routers, we searched for other ISPs where the attack patterns fit the same criteria. That is, low frequency of attacks, each IP attacks for less than 48 hours and a large number of IPs are attacking WordPress sites from a specific ISP.

This is the full list of ISPs we found globally where attacks that match this criteria are originating from. Notice the low “average attacks per IP column” on the right of the table (scroll right) and the large number of attacking IPs per ISP.

Port 7547 is a management port on home routers. It allows ISPs to manage the routers that their customers use on their home networks. It uses a protocol called TR-069 to provide a management interface. The TR-069 protocol can be used to provision devices, provide tech support and remote management, monitor routers for faults, for diagnostics, to replace a faulty configuration and to deploy upgraded firmware.

This protocol and port has had at least two serious security vulnerabilities associated with it in the past 4 years.

We have already mentioned the misfortune cookie vulnerability which targets management port 7547 and which some of the ISPs above are suffering from. RomPager version 4.07 suffers from the misfortune cookie vulnerability. In the ISPs that we are seeing attacks originating from, 14 out of 28 ISPs have remotely accessible routers that have a vulnerable version of RomPager version 4.07 on port 7547

Another vulnerability emerged in November last year which allows an attacker to use port 7547 and the management interface to gain administrative access to a router.

6.7% of Attacks on WordPress Sites are from Home Routers with Port 7547 Open

That means that 6.7% of all attacks on WordPress sites that we protect, during the past 3 days, came from home routers that have port 7547 open.

Shodan, an internet survey search engine, currently shows that over 41 million devices on the Internet are listening on port 7547. The TR-069 protocol is widely used among ISPs world-wide. 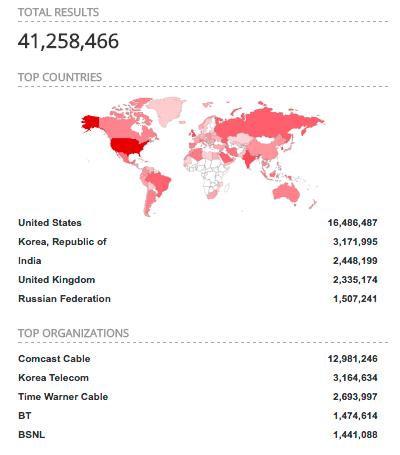 The Security Risk to Home Users

If a home router is successfully exploited, an attacker can access your internal home network. They have penetrated any firewall function that the router provides and can also bypass router network address translation. This enables them to exploit internal targets like workstations, mobile devices using WiFi and IoT devices like home climate control systems and home cameras.

We are already seeing bulk exploitation of TR-069 which has turned home routers into a botnet attacking WordPress sites. It is quite feasible that home network exploitation is already underway as well.

Security Risk to the Internet at Large

OVH was hit by a 1 Terabyte DDoS attack in September last year, one of the largest in history. Approximately 152,000 IOT (Internet of Things) devices that had been compromised generated the traffic in that attack.

In just the past month we have seen over 90,000 unique IP addresses at 28 ISPs that fit our compromised-router attack pattern. We monitor these attacks across our customer websites which is an attack surface of over 2 million websites. We only see a sample of the attacks that all websites globally experience. If you extrapolate the numbers, it indicates that there is a very large number of compromised ISP routers out there performing attacks and acting in concert.

At this point it would not be a stretch to say that vulnerabilities in TR-069 may have created a very large botnet which could soon generate the largest DDoS attack the Internet has ever seen.

How ISPs can help

Exposing port 7547 to the public Internet gives attackers the opportunity to exploit vulnerabilities in the TR-069 protocol. ISPs should filter out traffic on their network coming from the public internet that is targeting port 7547. The only traffic that should be allowed is traffic from their own Auto Configuration Servers or ACS servers to and from customer equipment.

There are already a large number of compromised routers out there. ISPs should immediately start monitoring traffic patterns on their own networks for malicious activity to identify compromised routers. They should also force-update their customers to firmware that fixes any vulnerabilities and removes malware.

There is nothing like a dream to create the future.   — Victor Hugo